Thankfully, Garage Therapy have created a shampoo that is classed as “multifunctional”.

How to use Garage Therapy Zero  Decon Shampoo

The benefit of this shampoo is the fact that by altering the dilution ratios of it, it can greatly alter the overall effect of it. I have been practicing with it as a normal shampoo, as well as a wheel cleaner and also a way to remove old waxes and sealants. The reason for it having this extra bit of bite is that it is not pH neutral, rather, it is more alkaline based.

When it comes to using it as a normal shampoo for a well-maintained vehicle, I have found that 20ml in 10 litres of water is the optimal ratio.

For wheel cleaning, there is again the option to have a bucket with the same dilution ratio as if you were washing the paint work. Another great alternative however is to use a foam pump sprayer, such as the IK Foam Pro 2. When using the IK Foam Pro 2, I use 15ml of Zero Decon Shampoo with 1 litre of water. This is to give it an extra bit of cleaning power for stubborn brake dust and dirt. This is also the same dilution ratio used for cleaning the lower ledges of the car which always get really dirty.

When it comes to removing the remnants of old waxes and sealants from the car, my process is slightly different. I like to give a normal wash first with a shampoo that doesn’t contain any waxes. This is to ensure that as much dirt and debris is removed from the panel as possible and to give the Zero Decon Shampoo the best situation to this and other bonded contaminants. I then use the Zero Decon Shampoo at a dilution ratio of 50ml of product to 10 litres of water. Depending on the age of the wax/sealant, this will dictate how much you need to add to the bucket.

Regardless of the dilution ratio used, I’ve found that in all instances, it produces a lot of suds and is also extremely slick.

Of course, an important factor to consider is the quality of Decon Shampoo.

With respect to wheel and tyre cleaning, it really does do a fantastic job used at the dilution ratios described above. The level of cleaning power that you need will be dependent if you even decide to use Decon Shampoo over a normal one.

One area I have not been able to test Decon Shampoo on is cars which are ceramic coated, simply for the fact that I do not have access to one just now. Garage Therapy have said that using this is a great way to ‘unclog’ the pores on the ceramic coating. Given how excellent their entire product range is and how accurate their claims are, I have got no reason to doubt them on this one.

For a maintenance wash, very little of the shampoo is needed to give a brilliant finish. Since increasing the volume of the shampoo will increase the likelihood of stripping older waxes and sealants, this is something that needs to be considered.

When I tried it for cleaning wheels, I was really impressed with how well it worked. It added a shine to the wheels that was second to none, and that was at a low concentration. Garage Therapy does have a dedicated wheel shampoo, but Zero Decon is a great option for really dirty wheels, or at a low dilution ratio for wheels that aren’t overly dirty. A video of the shampoo with an IK Foam Pro 2 can be found here.

The thing that really interested me in Zero Decon though was the ability of it to strip old waxes and sealants. I had unfortunately picked up a lot of road tar whilst driving through roadworks and this had hardened up by the time I had got home. Whilst it doesn’t specifically say it does help with tar deposits, I was curious to see what it would do to it. Despite Autoglym UHD Shampoo being fantastic, it doesn’t make any claims about being able to strip tar from a car, and when using it, it didn’t do this.

Zero Decon Shampoo did actually help to remove the smaller tar deposits, and shrink the larger, tougher ones. I still needed to follow up with a tar remover thereafter (and in some places I need to use a clay mitt as well), but it’s also good to know that Zero Decon can help with smaller tar spots.

In terms of striping the wax on the car,  I currently have Autoglym UHD Wax on it the majority of it, which has been on for 2 and a half months now. It was still performing really well, but I wanted to assess how well it works when it’s still holding on. With 50ml of the shampoo to 10 litres of water, it took four washes before I started to see the wax starting to degrade. It then took another three cycles before the wax was gone entirely. There are two take home messages from this. The first is that the Autoglym UHD Wax is extremely strong. The second is that knocking down the volume of Zero Decon used in 10 litres of water would be safe to use as a maintenance wash.

On the boot lid of the car, this had Collinite 845 which had been on the car for four months. It took two washes to completely strip the wax from the boot lid. This is still impressive for the Collinite considering how long it had been on for.

It is clear to see though that Zero Decon shampoo is strong enough to strip wax from the paint, but the effectiveness of this is (as indicated by Garage Therapy themselves), is based on the age of the wax on the car and also the quality.

It can be purchased directly from Garage Therapy.

If you would like to use it with an IK Foam Pro 2, this is available from Amazon. 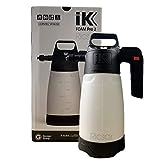 Last update on 2022-09-29 As an Amazon Associate I earn from qualifying purchases.

Garage Therapy Zero Decon Shampoo is a fantastic shampoo that should be in any detailers collection.