Duel Autocare are a relatively new detailing brand, having launched in 2020. They’ve already got a wide range of products, including their Bahama Blue shampoo.

How to use Bahama Blue Shampoo

When it comes to Bahama Blue, a little bit does go a long way. I use a 10 litre bucket when I’m cleaning the car and used 15ml in the bucket. This was more than sufficient to get an immense amount of suds.

As with any shampoo, it needs to washed out of direct sunlight. After the initial testing, I did then go over the windscreen again whilst the sun was on the glass. I was curious to see how quickly the shampoo dried into the glass with the sun on it.

It did dry in, but nothing like the shampoos from other brands. It also wasn’t difficult at all to remove the soap marks where it had dried in on the glass and the sun had went down. I tried three different methods to remove it. The first was plain water which did break some of it up. The second was using my wash mitt which removed all of the dried in shampoo. The third section on the glass was cleaned using Duel Autocare Optical Glass Cleaner (review coming soon). This blasted through the dried on residue and it also left a crystal clear finish on the glass as well. However, I would never recommend that you do let the shampoo dry on the paintwork, but if you do accidentally let it dry it, go over it again with more shampoo to dislodge the dry residue.

I also tried Bahama Blue in my IK Foam Pro 2. Whilst it isn’t specifically designed to be used as a pre-wash, I did get a nice spray out of it at a mix of 1litre of water and 5ml of Bahama Blue. This was an effective way to pre-soak the alloys and it helped to remove a lot of grime from them.

A thorough blast off with your pressure washer or hose is enough to remove the suds and leave the car sparkling.

The quality of the wash is second to none. I’ve tried some shampoos in the past that struggle with baked on dirt. With Bahama Blue, it cut through this with ease. I tried it on both the bodywork,  as well as the alloy wheels and in both instances, it gave a really great clean. I normally like to use a car shampoo when cleaning the alloys in conjunction with an iron fallout remover, and Bahama Blue performed great with it.

When I was using it, at no point did it feel grabby. I tested it with a new washmitt and also one that has seen better days and, in both instances, the surfactants in Bahama Blue helped the wash mitt glide along the bodywork. My car is white, and is protected with a wax and the Bahama Blue really made the white pop.

I also liked the clinging ability of the shampoo. When I wash washing the car, due to the high quality of the suds, they didn’t simply slide off the vertical panels. There was a noticeable cling to it, meaning that you’ve got time to go over the panel and not have to worry about a lot of the shampoo dolloping right onto the ground. Having said that, it doesn’t act like a super thick snow foam that’ll stay on the panel until you blast it off. The mix is just right and it made working with it a real pleasure.

There’s a few different sizes available for Bahama Blue. The 500ml bottle which is the one that I think the majority people will go for will give 33 washes which equates to roughly 32p per wash. For me, that’s incredible value for money.

Another bonus of this is that it is solely a shampoo, and it doesn’t have any additives in it to make the panel hydrophobic. I have found in the past that some shampoos that have these additives in them don’t always play nice with coatings that are already on the panel.

One of my tests on the quality of a shampoo is how long the suds hang around for after the bucket has been filled up. After leaving it for twenty minutes, there were still a lot of suds in the bucket. This shows the quality of the surfactants in that they do not diminish quickly unlike some other brands. Going back to the point above of roughly 32p per wash, I would normally expect to pay more than that for this level of quality. It really is a no brainer to have this in your detailing arsenal.

It is available on Amazon, as well as directly from Duel Autocare. 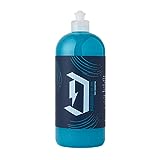 Last update on 2022-08-14 As an Amazon Associate I earn from qualifying purchases.

Duel Autocare Bahama Blue is a great, cost effective car shampoo that tackles grime on the car with ease.