Snow foaming a car is a great way to pre-wash it. In order to do it, along with a pressure washer, you’ll need a snow foam lance/cannon as well as high quality snow foam. When picking out a snow foam lance, it’s important that one is chosen that is not only of high quality, but will be able to produce the sufficient volume of foam to carry out the pre-wash properly.

In order to save you time researching these lances, below you will find my favourite snow lance picks. During the testing, Autoglym Polar Blast was used throughout in order to get a fair comparison of the quality of the lances. 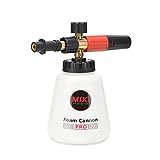 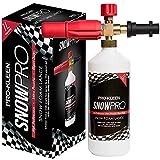 Autoglym designed their Polar Blaster in conjunction with their Polar series which comprises of Polar Blast, Polar Wash and Polar Seal. Despite this, you can also use it with your snow foam of choice.

The price is modest for the Polar Blaster, with it never really getting any more expensive than £35. For that, you’re getting a lot of product for your money.

What I really like about it is that it is just over half a kilogram when empty, but it feels like a really robust and high quality product. It’s survived several drop tests which is also a good thing (not that you would want to drop it).

Unlike some snow foam lances, the Polar Blaster has brass connectors on it, including a quick connect mechanism for Karcher K series pressure washers. The dials on it feel really good when adjusting the water to foam ratio to ensure that you get the foam density that you’re looking for.

As a nice bonus, you can also choose the width of the pattern of the foam, making it great to foam up tight spots on the car, such as the wheel arches. It can hold up to 1 litre of liquid, meaning that you should be able to get round the entire car several times without having to top it up.

A nice touch is that the base of it is wider than the top of it. This means that it is next to impossible for it to tip over when full of water and foam. It may not sound like much, but having had some lances tip over and crack (they were really poor quality), it’s great to see that it isn’t the case with the Autoglym offering.

The MJCC Foam Cannon Pro is the most expensive offering on this list, however, I included it for the fact that the build quality on it is immense. One of the claims that MJCC has made is that it is leak proof. After a lot of stringent testing, I can say that for me it never leaked once, so that’s a tick in the plus column in my book.

As mentioned, it is a bit more expensive than the Autoglym variant, especially when it holds 1 liquid of product as well. I did notice though that between the two, the MJCC Foam Cannon Pro provided a slightly thicker foam when using the same product.

As with Autoglym’s foam lance, the connectors are made of brass, and you can easily adjust the level of foam produced, and get really nice tight and wide spray patterns.

I would say that if you’re using the foam lance in a professional setting, then get the MJCC. However, it usually retails for anywhere between £20-£25 more expensive that then Polar Blaster. With that in mind, it would be up to you to decide if slightly thicker foam is worth that extra investment if you’re only using it to do your own cars.

The SnowPro Foam Lance is a great, budget friendly lance for those that want to say a bit of money when it comes to foaming their car, but don’t want to end up wasting money on a cheap, generic lance that’ll break after a few uses.

Effectively, it is half the price of the MJCC Pro. One big difference between the SnowPro and the Polar Blaster & MJCC Pro though is the bottle shape. Whilst the latter have a conical shape, the SnowPro is more like the original snow foam lance bottles meaning that is you fill it up too much, it can be really easy to knock it over.

Of course, the work around to that is to prop it up against something when filling it up, so it’s not a major deal, but it is something I’ve seen irk people in the past.

When I was using it though, I found it to provide a good level of foam on the car, although out of all three, I would say that whilst the foam was thick, it wasn’t as thick as Autoglym and MJCC.

As is the case with Autoglym, Pro-Kleen have developed this snow foam lance in conjunction with their own range of cleaning products, and they’ve done a stellar job on it. They’ve managed to hit the sweet spot with functionality and cost effectiveness.

There is also a 24 month warranty included with this, so in the unfortunate event that something went wrong with it, you’d be covered and Pro-Kleen would help you out to resolve the issue. As is the case with the other lances mentioned on this list, solid brass fittings are used to ensure that you can use the lance time and again. It’s also really sturdy and survived many a drop in the process of me testing it out.