Collinite is a brand that is known worldwide for its excellent products at a modest price point. One thing that has potentially hindered it in recent years is that it does not have a fancy box that is often used by the competitors. Unfortunately, a lot of people have thought it was a product lost in the past. Personally, I think the tin looks great, and it adds to its retro charm!

Collinite 476s is extremely easy to use, which is always a good thing! I like to apply it with a microfibre applicator pad by rubbing it into the wax and then applying it to the car in overlapping circles. Only a small amount of it is needed, and it should be applied in thin, even layers.

This is one of the fastest waxes I have ever used when it comes to the flash time. Within just a few minutes, the 476 was ready to be buffed off. This is something that is normally seen in a spray wax and not in a high-quality paste wax. The wax itself is a harder variant than the others on the market. After having it for 9 months, I have not seen any cracking it in.

If you leave it on for the right amount of time, there isn’t much effort to buff it off. If too thick a coat is applied, it can feel a bit grabby, but it is never a real challenge to remove it from the paintwork. I like to use a plush microfibre towel to remove the wax residue.

A test that I like to carry out is to see how easy a wax is to remove if it is left to cure for too long. 476 was a tad difficult to buff off after leaving it on the panel for 40 minutes. This was to simulate how hard it would be to remove if it was applied in the baking sun. Whilst this is normally advised against, sometimes it isn’t possible to not have some sun on the car.

The small difficulty in removing it from the paintwork in this case is due to how strong a bond it forms with the paintwork. In order to get around this and remove the excess, I applied a very thin layer to the wax I could not remove. This let me remove the final parts and the finish is fantastic.

The durability of this is fantastic, and it just falls short of the record held by Autoglym Ultra HD Wax when it comes to a single coat. In the summer, I managed to get 5 months from Collinite 476 and 3 months in the winter. This could be easily increased by layering the wax. When I do layer any wax, I like to wait 24 hours to ensure that the previous layer has properly bonded to the surface.

Having said that, Collinite is also cheaper than Ultra HD Wax.

Similarly, Collinite 476s performed the same when compared to UHD Wax when applied to alloy wheels. After a quick wheel application, layering lasts for 6 weeks. This is in comparison to the UHD Wax that lasted 9.5 weeks when layered on my alloys. Again, it’s a cheaper wax than UHD Wax, and these figures are still impressive.

Another great application for this would be the lower arches of the car below the door jambs. This is an area that is often neglected and can see a significant amount of corrosion because it is not protected. However, since Collinite 476 is so durable, and relatively inexpensive, it would be great to keep it as a dedicated wheel and undercarriage wax and have another tin of it solely for the bodywork.

As you would expect from Collinite, the results are extremely impressive. It looks amazing for the duration of it being on the paintwork.

What I also really like was the fact that the wax did not seem to get clogged up with contaminants. With other waxes on the market, I have seen that they can easily get clogged up when driving through particularly harsh environments.

In situations like that, the paint looks dull, even after the car has been rinsed off. It’s also the case that when the wax does get clogged up, it appears as though the water beading and sheeting effect is gone, indicating that the wax is no longer there. The only way to resolve this issue is to wash the car several times to ‘cleanse’ the wax. This wasn’t something I ever noticed with Collinite 476 which is a real bonus.

It really helps to keep the car looking clear thanks to it being extremely hydrophobic and it makes extremely tight beads on the paintwork. When the car is dry, the shine off it is exceptional and it does look as thought the car has been professionally detailed. When such a great wax is available at a low price point like this, it really makes it tough to use a ceramic coating. However, there are of course that will prefer the ceramic option for durability that lasts several years compared to 7-8 months when Collinite 476s is layered. 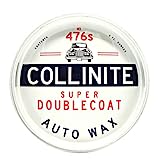 Last update on 2023-02-01 As an Amazon Associate I earn from qualifying purchases.

Collinite 476s is a brilliant hard hard paste wax. It’s extremely long lasting and should be part of every detailers collection.

Not as easy to buff off as some other options