One of the most important tools in a detailers collection is high quality detailing brushes. These are brushes that can be used on every part of the car, including the wheels. Although it’s important to point out that dedicated brushes can and should be used for the wheels that would never be able to be used for the body work or interior of the car.

I’ve spent a considerable amount of time (and money) on trialing the many different detailing brushes that are available online. After a lot of testing, I’ve settled on the offering from 26JPN. These are extremely similar to the brushes offered by Detailing Factory, but they’re around £10 cheaper on average.

More specifically, these are the Ultra Soft Brushes. There is an option that has slightly harder bristles, but for some applications I found these to be a just a bit too aggressive.

The brush heads are genuinely super soft. One test that I do is to see how soft it is against the skin. Before using the brushes for the first time, it felt amazing. I’ve used both of these brushes time and again now (well into the double figures), and they still feel just as soft.

There are two of the Ultra Soft Detailing brushes in the kit, meaning that it’s extremely easy to clean out the vents and grills in the interior of the car with the smaller one. Since they are so soft, they are extremely flexible meaning that it’s really easy to clean the more intricate parts of the exterior as well. I tested the brushes out on the B pillars on my car which are a gloss black with paint that can collect swirl marks extremely easy. When using these brushes, there was no damage done to the pillars at all.

I’ve been using them a lot, as mentioned above. One application that I was concerned about was using them with a dedicated wheel cleaner. There was the small worry that they wouldn’t be able to stand up to the punishment of being hit with a wheel cleaner, and then an iron fallout remover. On the other hand, I did try these brushes out initially on black wheels which would show up any scratches right away if a more conventional brush had been used. I’m extremely pleased to say that the brushes held up extremely well, and there was no loss to the bristles either. Use after use, they still remained soft which is extremely promising.

Since they were able to withstand the somewhat harsher chemicals found in wheel cleaners, I had no worries that it would be suited to more day to day applications on intricate areas when used with all-purpose cleaners.

One other application I wanted to try as removing tar deposits from the lower parts of the car, as well as removing tar deposits from silver alloys. I’ve never found a wheel cleaner that was able to remove tar spots from it, so this gave me a great opportunity to see how the brushes fared when it came to using a tar remover. As is the case with the wheel cleaner and iron fallout remover, there was no detriment to the brush at all.

It’s important to note though that it’s not just the bristles that need to be tested in terms of durability. It’s natural for a brush to be dropped on the hard ground, as well as being thrown into a bucket. For those that are detailing an engine bay, it’s near inevitable that the brush will end up slipping out of your hand and clanging off of several components in it. A quick pointer for engine bay detailing is to wrap an elastic band through the hoop at the end of the brush handle and attach it to your wrist to prevent it reach the inner recess of the engine bay.

When it came to using the brushes with normal car shampoo, there were no worries at all with the shampoo damaging the bristles. Not only that, but it was great for removing dirt and debris from the badges on the car as well as the recess behind the door handles that a wash mitt can have issues properly cleaning.

After treating the brushes less than favourably (dropping them, throwing them etc), I’m really pleased to say that they held up exceptionally well. There was no cracking to be seen on the handles, nor was there any cracking around the lip where the bristles protrude from the brush handle. These brushes aren’t overly expensive, so it’s great to see that they’re of extremely high quality and can take a pounding that can happen during a normal detail.

The aftercare for them is really easy too; rinse then in water, wring them out and let them hang to allow any excess water to drip out. That’s it. 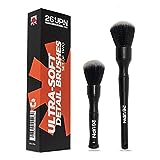 Last update on 2023-02-01 As an Amazon Associate I earn from qualifying purchases.

Whilst they aren’t overly expensive, they aren’t the cheapest soft brushes either. However, this is definitely a case whereby you’ll be investing in a high quality set of brushes that will last a long time instead of buying a cheaper set that you’ll need to replace every few months. As always though, be sure to have a separate set for your wheels to ensure there’s no cross contamination. The only downside I can see with these brushes is that different coloured handles aren’t available. This would have made it easier to prevent any mix-ups between ones that have been used on the wheels and ones that haven’t.

Feels great in the hand